The MBA Modular Class of 2006 has launched a campaign to provide the GSB Philippi Village campus with a video link back to the main campus at the V&A Waterfront.

The idea was conceived at their 10-year reunion in December 2016, where the class challenged themselves to leave a legacy to the GSB. After visiting the Philippi Village campus, members of the class were highly impressed with the facilities and what they offer, and noted the need for a dedicated video link back to the main GSB campus to bring the school’s world-class teaching directly into the Philippi community.

Says class member and campaign co-ordinator, David Crewe-Brown, “It is an incredible facility and they have had great success already with multiple small businesses running using this [GSB Philippi Village campus] as a base”.

Visit the campaign page and get involved! 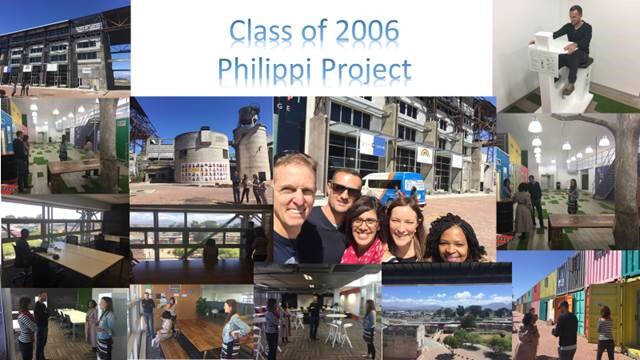 Ntsikakazi “Kiki” Hene / GSB MBA 2017 student and GSB Foundation Scholar // I’m currently studying for the MBA and I noticed that until someone tells you “Go and do this assignment on this particular topic” you always just learn or read what you are comfortable with – you won’t actually expose yourself to other things that are going on around you; and I think that’s what the MBA taught me, to look beyond and not just to keep looking at what I know or what I’m comfortable with.

Mervyn Christoffels / GSB MOD MBA ’06, Executive Director ICT Systems at the University of South Africa and champion of the GSB Foundation’s Epic Scholarship // You only realise the value of an MBA some time after you have completed it. It can be a significant change agent, taking you out of your comfort zone. You have to toughen up to thrive – and you either take on the challenge or not. Yes, doing the course is definitely about acquiring key management skills but they only really count when they become part of your DNA, allowing you to deal with whatever comes your way.

Peter Thorrington-Smith / GSB MBA ’69, Co-Founder of UTi Worldwide // Given what the GSB has done for me, it’s great that there is now a fund to which I can contribute to in order to express my thanks – and a fund that will allow bright and inspired entrepreneurs without the necessary financial resources to enjoy the GSB experience and make a difference in the world. There is no doubt that this can be a life-changer for talented young men and women.

We believe the GSB MBA mindset carries a balanced blend of the economic, social, political and ethical – a combination geared to steer the country along a positive path.

The current interest in social entrepreneurship implies that 35% of GSB students will make a social as well as an economic impact – that is truly inspiring.

“We need to look beyond pre-existing leaders and recognise that we all need to contribute as leaders if we are to successfully drive the moral and economic transformation imperative…” – Excerpt from an article by Nicola Kleyn, Dean of GIBS, posted here…

Recently, an article published on LinkedIn “America’s Wealthiest Business Schools” cited a comparison between the endowment funds of America’s top business schools and their ranking – the outcome predictably is that the bigger the endowment the higher the school’s ranking.

Is that really a surprise. What the article hints at but does not mention is how those endowments have come about; this is of greater significance because the schools with the big endowments have highly developed alumni relations programmes which develop deep connections to the school and broad networks off which the school can leverage over time. The example of Harvard Business School in the article illustrates this point: during the Great Recession when [just about] all endowments were taking a knock, it increased its endowment by nearly 25% in only 4 years – to a massive $3.3-billion.

Strong alumni engagement is a critical element in building an endowment and seeing it through the lean years. A comprehensive, sustained alumni relations programme is the key to gaining that level of commitment from alumni, and the GSB Foundation works closely with the GSB Alumni Relations office to assist it in building these relations. You can help us by being a champion, an ambassador, within your MBA class – please contact us if you would like to get involved.

There are a great number of graduates out there who feel exactly like we do – the school has given us so much for which we are extremely grateful. As a token of thanks, we are contributing to those who are still to come. We want to get the ball rolling and get the fund to a level where it can make a real difference to Africa.